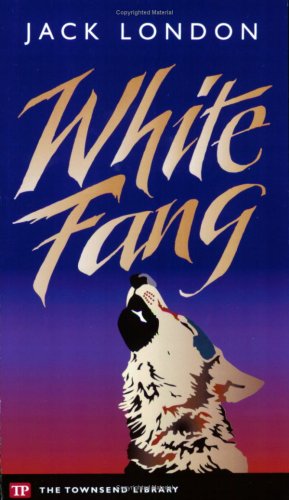 Back cover description:
"From the day of his birth, the wolf pup White Fang has had to fight for his life.
His enemies were hunger, cold and the teeth and claws of predators. Now, snatched from his forest home, he encounters a powerful new challenge to his survival. Will he be able to adapt or will Man be the enemy that finally destroys White Fang?"

I had this on my shelf for a few years now, though I never picked it up after I first bought it off a book sale at the library. I had read Jack London's Call of the Wild before buying White Fang, but back then, Call of the Wild didn't really appeal to me as much as I had originally thought when I borrowed it, so I was hesitant on reading this one. However, seeing how I usually read a novel of some sort on the bus ride to school, I realized that I ran out of library books and decided to turn to my bookshelf. There were some of my old favorites, some books that I wanted for my shelf and others that I have yet to read. White Fang fitted into the last category. So out of boredom, I picked it up again after a handful of years and found that it was a lot intriguing than I had originally labelled it.

As you could see from the cover photo, White Fang is the name of a wolf-dog who was born in the wild. However, he remained nameless for the first portion of the book. Jack London did a marvelous job describing nature's harsh conditions such as how White Fang had to fend himself when he had gone against his mother's warnings of leaving the cave and learning for the first time what was really in the world. There, White Fang learned quickly the difference between things that were alive and those that weren't. As well as the difference between himself and those that were alive. Some of them, he could eat, but some others could end up eating him. It was his first glance into the world.


As the book progresses, White Fang learns to survive and his understanding of the world grows. He learns to submit to his human masters and the cruelty that lays in waiting if he doesn't follow his orders. As a wolf born with a mixture of dog-blood, he was labeled as an outsider among the other dogs that he meets and through those events, White Fang's fighting skills and instincts sharpened throughout the book. As he grew, White Fang was passed from man to man, each having their own distinct personalities that had an impact on White Fang. He became whatever they shaped him to be. A sled dog, a fighter and finally, a friend.

I really enjoyed this book and oftentimes, I was disgusted with the cruelty that White Fang had to face. The era was most likely written during the time of the gold rush, because one of White Fang's owners had been there for that event. Oftentimes, I had wondered what Jack London was trying to convey from his story, but there are so many different possibilities that there didn't seem to be a wrong answer. Now that I've come to appreciate classic literature a little more, I might go back and re-read Call of the Wild to compare the two books.

Source: Owned
My rating:  5 Coffee cups (Loved it and couldn't put it down)